Pakistan Army Career Jobs in Pakistan Scope Opportunities Salary requirements guideline for courses, subjects, admissions, training experience programs for male, female complete information get here. Jobs in Pakistan Army are offered twice in a year, educated youth are enlisted in Pakistan army as officers through PMA long course. Initially they are given the rank of second lieutenant and are made responsible for some people and equipment’s. Leading newspapers published Pakistan Army Jobs.
Pakistan Army is the land warfare uniform service branch of the Pakistan Armed Forces. It came into the existence from the British Indian Army that ceased to exist following the partition of India that resulted in the independence of Pakistan on 14 August 1947.

1. Regular Commission
2. Short Service Regular Commission
3. Direct Short Service Commission
4. Soldier Recruitment
There are various opportunities to enlist in Pakistan army as officer. National dailies publish such details time by time. These courses are:
1.      PMA Long Course
Intermediate with 50 percent mark or A-level passed youth can apply for Pak Army Jobs  as an officer through PMA long course. Age limit is from 17 years to 22 years for civilian and 17 years to 23 years for serving Armed Forces Personnel except army as army soldiers have ginven the age limit of 17 to 25 years.  For those who have passed four years BS or BA Hons or BBA, the age limit is from 17 to 24 years. The age limit Relax-able for three months both in upper and lower age limit in all cases. After qualifying the selection procedure a candidate has to complete two years training and education period in Pakistan military academy, Kakol. Successful completion of PMA long course in Kakol, he is commissioned as sub-lieutenant and is conferred B.A / B.Sc degree.  For Pak Army Jobs Applications are invited twice in a year in the months of April and October for admission in PMA long course.
Selection procedure for PMA Long Course
• Intelligence/personality tests and Academics written test based on multiple choice questions from English, Maths, Pak-Studies, Islamiat and general knowledge are conducted at AS&RCs.
• Candidates declared successful in written/intelligence tests will undergo physical, medical tests and preliminary interview at AS&RCs.
• Candidates qualifying preliminary selection will be sent to ISSB for further tests.
• Medical examination of ISSB recommended candidates will be carried out at near by CMHs.
• Final selection is made at GHQ based on overall merit prepared.
Note:
A candidate can get himself registered through online for preliminary test.
Candidates can also register themselves at AS&RCs. 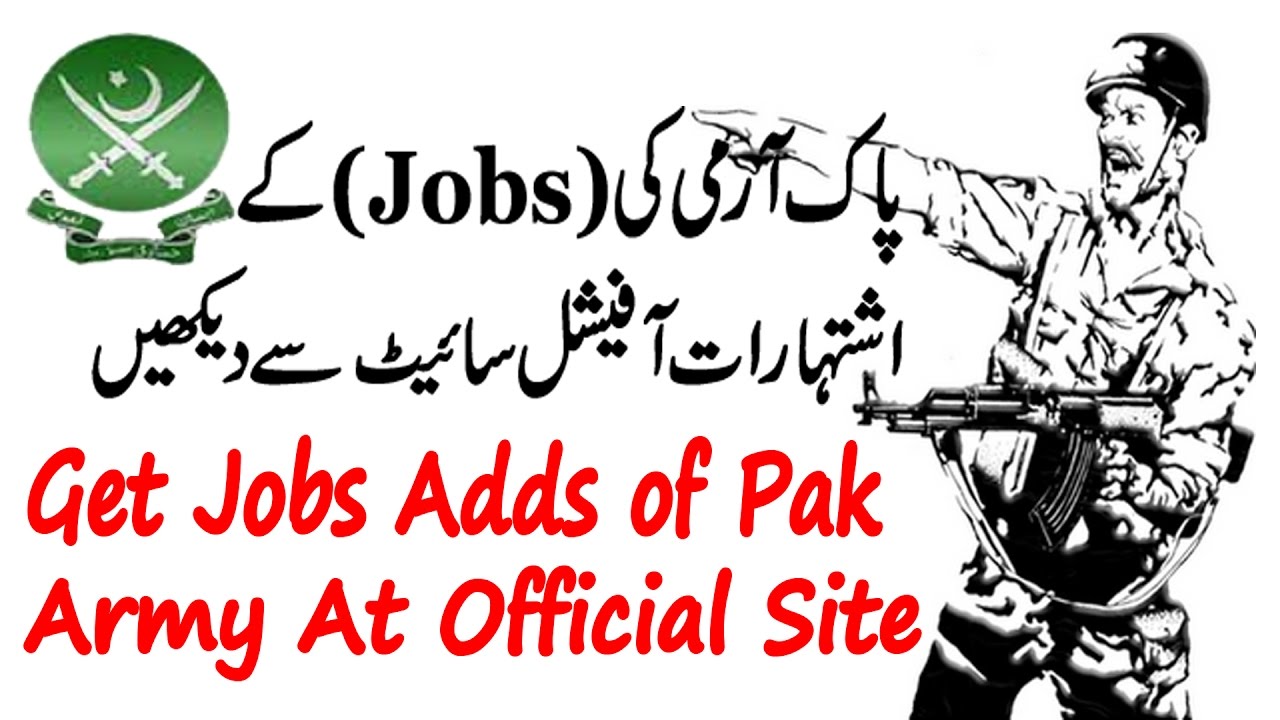 2. Direct short service commission / Graduate/Technical Graduate Course
Direct short service commission in  Pakistan Army  can be get after B.A or B.Sc degree.  The same selection procedure is adopted as mentioned above.  60 percent marks in the prerequisite examination are compulsory.  Age limit is 28 years for graduate.  And for those candidates holding M.A, M.Sc, Darse-Nizami or M.A Islamiat degree, the age limit is 35 years.
Besides army medical core and dental core, other cadets are trained in Pakistan Military Academy Kakol.  Cadets are commissioned in the rank of captain after completing the training.  In case of army education core or its branch of religious education, Ph.D or M.Phil degree holder are given concession in term of age and further seniority in rank too or previous service can also be counted.  After training these cadets get fundamental education about their concerned core and on different occasions further training is arranged along with other officers during service.
Army Medical College (Pre-medical group)
Those students who have passed FSc in Pre-medical with 65% and their age are between 17, they can apply for admission in Army Medical College for M.B.B.S course. After selection they get the M.B.B.S course done for five years in Army Medical College. Having completed the training they go to Army Medical core centre for ten week military training. They were commissioned in the rank of captain after completing this course. Some seats are reserved for women under this scheme.
Technical cadet Course (pre-engineering group)
Candidates having FSc pre-engineering can get commission in army technical cadet course.  Candidates who have secured 65 % marks in FSc along are eligible to apply for this course. A test of FSc level comprising questions from physics, chemistry and mathematics is taken. Successful candidates are called for I.S.S.B tests. I.S.S.B qualifiers are medically examined in the nearest military hospital.  A final list is prepared and the successful candidates are sent to different colleges of Pakistan Army namely Military College of engineering, military college of signals, college of electrical and mechanical engineering.
After academic training of 4 years, the successful cadets are to under go for military training.  PMA Kakol is the training center for those officer selected for Pakistan army. Those candidates who qualify ISSB tests are admitted to PMA for training.
Environment
A soldier is trained in such a way that he can face the enemy under any circumstances, therefore officers and solders are expected to be coped  with different sort of situation. Army has to do its job whether it is storm, raining, snowing or intense hot and cold.
Future prospect
Progress in army is depending on the conditions of personal ability and success in the required examination. Necessary training is provided at the time of up gradation of the position. It takes normally one year to be lieutenant from second lieutenant, four year from lieutenant to captain and to reach at the slot of major it may take seven years. Selecting suitable candidates for posts above major, increment is made according to capacity and eligibility.
Personal Characteristic
An officer is expected to observe discipline. The most important quality of an officer in army is his leadership quality for which he must be confidence. Analytical mind and prompt decision making ability is imperative. It is necessary for an officer to analyze received information. He must be proficient in his work and able to communicate his views to other so that he can create sense of comradeship.
Pakistan Armed Forces related useful Links
www.ispr.gov.pk
www.joinpakarmy.gov.pk
www.pakdef.info
www.pakistanarmy.gov.pk
List of Pakistan Army Selection Centers
• Army Selection and Recruitment Centre, PESHAWAR. 091-201-35885
• Army Selection and Recruitment Centre, RAWALPINDI. 051-561-34137
• Army Selection and Recruitment Centre, LAHORE. 042-6699-35885
• Army Selection and Recruitment Centre, MULTAN. 061-531-35885
• Army Selection and Recruitment Centre, HYDERABAD. 022-791-35885
• Army Selection and Recruitment Centre, KARACHI.  021-560-35885
• Army Selection and Recruitment Centre, QUETTA. 081-2490-35885
• Army Selection and Recruitment Centre, GILGIT. 05811-961-35885