CMH Multan initially known as Multan hospital was built in 1879 and being the oldest hospital of this region has the unique distinction to bring the light of modern medicine to this city of Sufis and Saints. It was then a part of Indian Medical Service (Army). It initially had a British and Indian wing, and due to scarcity of Muslim doctors, it was manned almost entirely by British and Hindu doctors. In 1895, it was placed under Lahore Zone of British Military Command. It is the first hospital of Multan to get ISO Certification and with that the Quality Management System is fully installed.

Interested applicants are informed that Cmh Multan Institute Of Medical Sciences, Multan admissions are open and you can submit the applicaiton at the earliest time. Detailed Application Process, Eligibility criteria, Admission schedule and Contact details are mentioned in the institute’s official website http://www.cims.pk/ 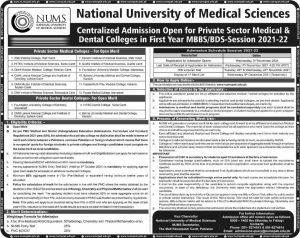