Government College of Technology was established in 1889, bearing the name RAILWAY TECHNICAL SCHOOL”. In 1927, it was named as “Government Technical School. In the year 1941, it was renamed as CRAKE TECHNICAL INSTITUTE. On 20th August 1949, it was merged with HINDO DIAMOND TECHNICAL SCHOOL. In 1953, it was declared a Government Institute and named as Government Technical Institute. Finally in 1974 Bachelor of Technology courses were started here under the examination body i.e. UET Lahore and consequently became Government College of Technology. In the year 1999, the college was taken over by Technical Education and Vocational Training Authority (TEVTA). In addition to DAE “TEVTA Short Courses” were launched with contribution of Punjab of Technical Education.

Interested applicants are informed that Government College of Technology (Railway Road), Lahore admissions are open and you can submit the application at the earliest time. Detailed Application Process, Eligibility criteria, Admission schedule and Contact details are mentioned in the institute’s official advertisement below. https://www.gctrailwayroad.edu.pk/

During academic period, students will have to pay fee and other dues according to following rates. The dates & other information regarding fee are affixed on the college Notice Board. Fine would be received if a candidate is not able to pay fee within due date. A fine RS: 10/= per day will be charged after due date. A student who is not be able to pay fee during 2nd and 3rd year within twenty days after due date, his / her name will be struck off from the college. Payment in installment will not be acceptable. For further information visit website https://www.gctrailwayroad.edu.pk/fee-struc/

Three merit lists should be displayed at Website & Notice Boards of the institute separately for Morning and Evening shifts. 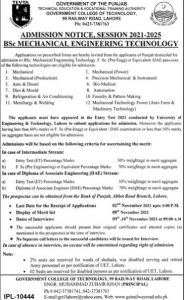