Radio Producer is responsible for overlooking the programming of a radio channel. They decide on the songs that will be played on the channel and take care of the personnel working with him. They also choose the timings of different shows and news. They edit the scripts of different programs to be played on the radio.

How to become a Radio Producer:

To become a Radio Producer having a good experience. You need to possess the skills to be creative and interact with the listeners through voice. For smaller stations, a radio producer gets diverse range of work including recruiting employees and managing the marketing activities of the radio station.

Producers play an integral role in the television, film and video industries. In this role you will oversee each project from conception to completion and may also be involved in the marketing and distribution process. You’ll work closely with directors and other production staff on a shoot. 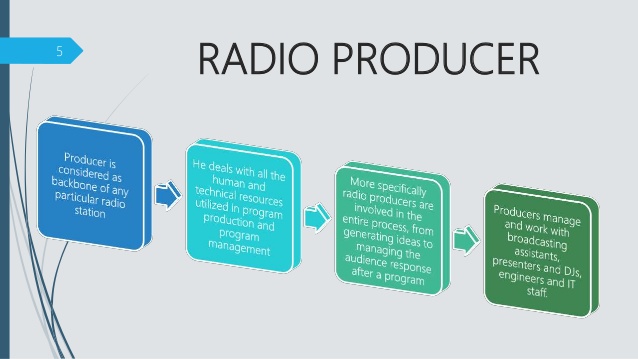 There are various institutions that conduct courses in mass communication, production, media, and journalism. There are also short training programs that provide certification courses in order to become a radio producer. Get started by working in local stations in the broadcasting division. After getting good hands-on experience, one can easily shift to a high paying bigger station.

From start and pre-production through the final touches, media Producers are integral components to managing operations within media projects. The job comes with a large amount of responsibility and in fields such as broadcasting, film, television, and even commercials.

There are various excellent institutions in Pakistan. They help the students to gain theoretical and practical experience in this field. Film producers are not necessarily required to have postsecondary education, although it’s common for them to have a bachelor’s degree in theater management, film studies, cinematography, communications or journalism. They may also benefit from training in business.

Aspiring TV producers should consider earning a bachelor’s degree in film and TV production, directing, communication or another related field. Professional experience in the movie or TV industry is needed.